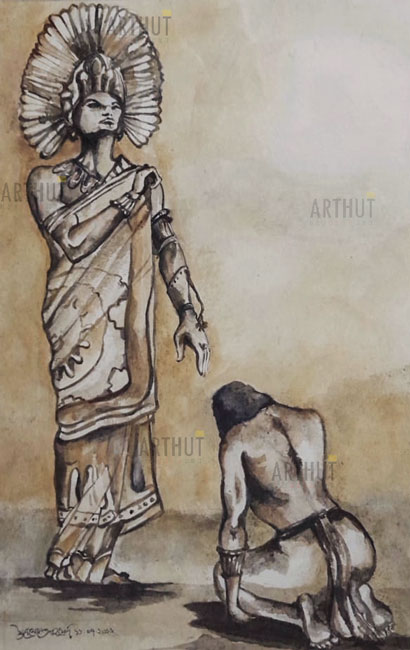 The Dilemma of Divinity

The painting represents an attempt to masquerade as something that someone is not. On one hand, it also shows that the past is best left where it belongs. Furthermore, this painting depicts wit and wisdom.

The person portrayed here is Montezuma: the Emperor of the Aztecs. The Aztecs believed their Emperors to be the agents of god like – The Pharaohs. On the contrary, the sad truth is Montezuma, an emperor known for being naïve, fails to comprehend the complexities of life and often perplexed by thought provoking revelations.

The light, divine symbolism of wisdom is a far-fetched concept to him. It doesn’t reach near his shadows rather it’s drifting apart proving his wisdom lies precisely in the fact that he is no longer the man he could be if he used his true potential.

Thus, the relay messenger appears and wants to bestow his divine blessings by opening the portal of knowledge to Montezuma because he envisions the slim possibility of Montezuma coming up to him and embrace everything he has to offer in order for him to become invincible, knowing the universal enigmas .

Thus this painting is all about hope, possibilities and an achievable Eden on Adamah!

PS: This painting was inspired by a scene from google photos (just a scene without any deep meaning). The subtle meanings and tricks, however, were added and constructed by the artist. 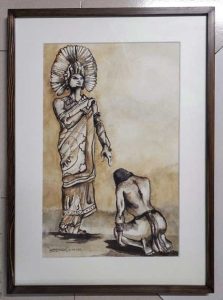 Add to Wishlist
Add to cart